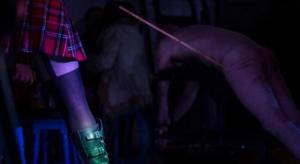 Whilst the early history of corporal punishment is unclear, both corporal and judicial punishment was practised in classical civilizations such as Roman, Greek, Egyptian and also in Israel.  The prevalence of caning in British schools can be found during the 19th and 20th centuries, and was banned in UK private schools only as recently as the early 2000’s.  A rattan cane was the most commonly used implement, struck either across the student’s clothed buttocks, legs or sometimes on the hands.  Slippering was also widely used in many schools – this involved striking the buttocks (or occasionally the hands) with a rubber-soled gym shoe, or plimsoll as it’s also known.

There is so much more to a corporal caning session than just the beating itself, though.  As I pace the length of my London studio, I hold you in my implacable gaze.  Your head will fill with my fragrance as I circle around you or stand over you, and you will thrill to my words when I bend down to speak quietly in your ear.  I know exactly how to heighten your senses and sharpen your anticipation whilst I deliberate over your punishment caning.  When I whisper encouraging words, you’ll desperately want to take more for me…

“An accurate caner able to constantly hit the spot Goddess Cleo, had my backside feeling like it was on fire. It will be days before I sit normally again.” – slave s, July 2016

You need (or want) punishment but cannot be marked?  Not a problem.  My skills enable me to give you a thorough punishing that will leave no trace of broken flesh. I’m also ambidextrous, and cane equally accurate from both sides, either left or right handed.  So if you’re a seasoned caning enthusiast, I can cane you with a selection of my canes so that there won’t be any marks at all.

Talking of which, that brings me to my cane collection:  what a vast selection I have at my disposal!  From the light, almost playful rattan canes, to the smoked Dragon, the dreaded reformatory cane, and for a judicial caning I have a traditional Tohiti.  I might bend you over a piece of furniture or have you on tip-toe with your nose against a wall;  but however you take your caning, you will count each stroke and thank me for it.

“They came again and again, batches of six accurate strokes each slightly harder than the previous.  Some delivered slowly, some fast, different sensations combining to create in me an intense physical and mental state.  I had slipped into subspace; the pain came and went as I went deeper and deeper. I must have received at least sixty strokes when Goddess Cleo told me I was to prepare for the final twelve.  I breathed deeply as they came, hard, spot on target and incredibly painful.”  – Joe, June 2018

If you’re looking for a more severe form of caning, I also offer a range of Judicial Punishment.

But there is something you should always remember:  I intend to derive pleasure from your pain…

EMAIL ME on worshipcleo@gmail.com for all enquiries – but make sure you’ve visited my Contact page for all the details first.

Please visit My Interests Page to see what other activities I have to offer.